The current third (and last) part deals with the technical process of actually pulling the information from the Ultimate Debian Database UDD and getting it into Neo4j. We will close with a few sample queries and discuss possible future work.

The UDD has a public mirror at https://udd-mirror.debian.net/ which is accessible via a PostgreSQL client.
For the current status we only dumped information from two tables, namely the tables sources and packages, from which we dumped the relevant information discussed in the previous blog post.

We first tried to use the command line client psql but due to the limited output format options of the client we decided to switch to a Perl script that uses the database access modules, and then dumped the output immediately into a Perl readable format for the next step.

The complete script can be accessed at the Github page of the project: pull-udd.pl.


Generating the list of nodes and relations
The complicated part of the process lies in the conversion from database tables to a graph with nodes and relations. We developed a Perl script that reads in the two tables dumped in the first step, and generates for each node and relation type a CSV file consisting of the a unique ID and the attributes listed at the end of the last blog post.

The Perl script generate-graph operates in two steps: first it reads in the dump files and creates a unique structure (hash of hashes) that collects all the information necessary. This first step is necessary due to the heavy duplication of information in the dumps (maintainers, packages, etc, all appear several times but need to be merged into a single entity).

We also generate for each node entity (each source package, binary package etc) unique id (UUID) so that we can later reference these nodes when building up the relations.

The final step consists of computing the relations from the data parsed, creating additional nodes on the way (in particular for alternative dependencies), and writing out all the CSV files.

Complications encountered
As expected, there were a lot of steps from the first version to the current working version, in particular due to the following reasons (to name a few):
・Maintainers are identified by email, but they sometimes use different names
・Ordering of version numbers is non-trivial due to binNMU uploads and other version string tricks
・Different version of packages in different architectures
・udeb (installer) packages

The last step was creating a Neo4j database from the CSV files of nodes and relations. Our first approach was not via CSV files but using Cypher statements to generate nodes and relationships. This turned out to be completely infeasible, since each Cypher statement requires updates in the database. I estimated the time for complete data entry (automated) to several weeks.

Neo4j recommends using the neo4j-import tool, which create a new Neo4j database from data in CSV files. The required format is rather simple, one CSV file for each node and relation type containing a unique id plus other attributes in columns. The CSV files for relations then link the unique ids, and can also add further attributes.

To give an example, let us look at the head of the CSV for source packages sp, which has besides the name no further attribute:

We see the unique id, which is tagged with :ID (see the neo4j-import tool manual for details), and the name of the source package.

That is a list of start and end ids. In case of additional attributes like in the case of the dependsrelation we have

After having prepared these CSV files, a simple call to neo4j-import generates the Neo4j database in a new directory. Since we changed the set of nodes and relations several times, we named the generated files node-XXX.csv and edge-XXX.csv and generated the neo4j-import call automatically, see build-db script. This call takes, in contrast to the execution of the Cypher statements, a few seconds (!) to create the whole database:

Looking at the script build-all that glues everything together we see another step (sort-uniq) which makes sure that the same UUID is not listed multiple times.

Let us conclude with a few sample queries: First we want to find all packages in Jessie that build depends on tex-common. For this we use the Neo4j visualization kit and write Cypher statements to query and return the relevant nodes and relations:

This query would give us more or less the following graph: 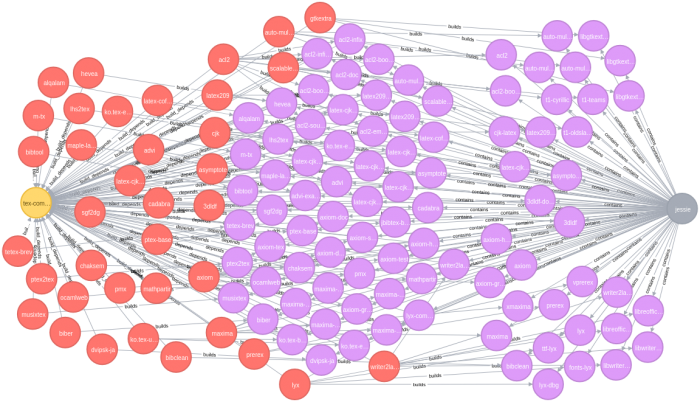 (click to enlarge)
Another query is to find out the packages which are most often build depended upon, a typical query that is expensive for relational databases. In Cypher we can express this in very concise notation:

which returns the top package debhelper with 55438 packages build-depending on it, followed by dh-python (9289) and pkg-config (9102).

We have shown that a considerable part of the UDD can be transformed and be represented in a graph database, which allows to efficiently and easily express complex queries about relations between the packages.

We have seen how conversion of an old and naturally grown RDB is a laborious job that requires lots of work - in particular domain knowledge is necessary to deal with subtle inconsistencies and corner cases.

Lessons we have learned are
・Finding a good representation is not a one-shot thing, but needs several iterations and lots of
domain knowledge;
・using Cypher is only reasonable for query but not for importing huge amounts of data
・visualization in Chrome or Firefox is very dependent on the version of the browser,
the OS, and probably the current moon phase.

There are also many things one could (I might?) do in the future:

Bug database: Including all the bugs reported including the versions in which they have been fixed would greatly improve the usefulness of the database.

This concludes the series of blog entries on representing Debian packages in a graph database.